Residents can expect up to 12 weeks’ disruption as a result of roadworks to install new gas mains along Station Road.

The roadworks, which are due to start today, will involve the use of temporary two-way traffic lights and some temporary closures of side streets, which may include Rosslyn Crescent and Woodlands Road.

The latest phase will cover the stretch of Station Road running from outside the Civic Centre to the junction with Elmgrove road with the roadworks expected to last for 12 weeks.

Plans for a 24-hour CPZ in Rosslyn Crescent and Frognal Avenue look set to be dropped after residents said they were against the move.

Residents were consulted in November on a series of proposals designed to improve parking and road safety in the two streets.

A report on the consultation for the Traffic and Road Safety Advisory Panel recommends most of the proposals go forward to a new “statutory consultation”.

However, it recommends that the idea of a 24-hour CPZ be abandoned because the majority of local people are against it.

Just 24 per cent of those who responded to the consultation were in favour of extending the current hours of operation.

Residents are expected to be asked again for their views on other measures such as “no loading at any time” restrictions alongside Harrow Mosque in Rosslyn Crescent.

Residents have been urged to report drivers parking illegally to attend Harrow Mosque as part of efforts to solve the problem.

HCRA has raised concerns with mosque representatives and Harrow Council about congestion, illegal parking and inconsiderate driving at the top of Rosslyn Crescent near the mosque.

The mosque has been taking steps to deter drivers from coming into Rosslyn Crescent, parking on double yellow lines and blocking driveways including making announcements at prayer meetings, using stewards to supervise parking and sending out leaflets.

But the problem has persisted and the mosque, council and HCRA are now urging residents to report any issues to help identify persistent offenders and gauge the scale of the problem.

The mosque has also set a special email address for residents to raise concerns about parking, noise or any other issues at neighbours@harrowmosque.org.uk

Anyone who sees a car parked illegally should jot down the number plate.

Finally, the mosque committee has set up an emergency hotline on 07784 927045 for urgent problems such as a car parked across a driveway. Please note, this number is for emergencies only. 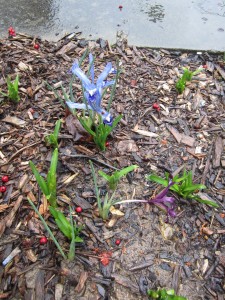 Spring is bustin’ out all over in Rosslyn Crescent and neighbouring streets as a result of HCRA’s bulb campaign.

The residents’ association planted bulbs under trees and lampposts in the winter to create a cheerful display this Spring.

The bulb campaign is part of our efforts to make our neighbourhood a nicer place to live. You can help by weeding tree pits, watering trees and flowers, picking up litter and perhaps planting a few flowers or bulbs or your own under your nearest tree.