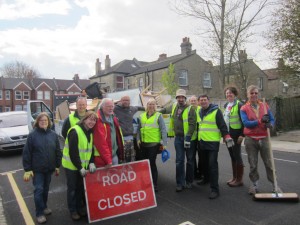 A team of volunteers from HCRA took to the streets on Saturday for the association’s annual “Dump Run” event.

Scouts from the 13th/21st Scout Group lent a hand and RSPCA staff also gave up part of their Saturday to join in. 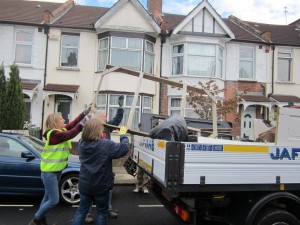 The team carted away more than half a dozen vanloads of junk as well as picking up litter and doing a spot of gardening around trees.

We’d like to thank everyone who took part, gave donations towards the hire of the van and supplied food and refreshments. See you next year! 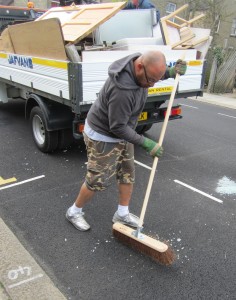 HCRA has joined forces with the RSPCA and recycling company to help recycle unwanted items collected during the association’s Dump Run event on Saturday.

The charity will collect any good quality furniture that people don’t want any more and has also provided collection bags for smaller items like books and clothes.

HCRA will be distributing the charity bags alongside a final reminder leaflet ahead of the event this weekend.

The Dump Run kicks off at about 9am on Saturday. All volunteers are welcome.

This year’s event is being supported by Harrow Council’s Street Refresh scheme, which is providing gloves, bin bags and tools.

Residents are gearing up for their annual Spring Clean with the popular “Dump Run” event just a week away.

The Dump Run gives householders in HCRA’s three streets the chance to offload unwanted junk, which is taken to the town dump for free.

A team of HCRA volunteers will also be picking up litter, removing fly-tipping and doing some gardening as part of the event on Saturday, April 27.

This year Harrow Council is providing resources including gloves, bin bags and litter pickers as part of its Street Refresh scheme.

Anyone can show up and lend a hand with the event kicking off at about 9am. HCRA members will also be collecting donations towards the hire of the van.

If you would like more information about how to get involved then call Jo Stephenson on 07980 854097.

New double yellow lines and other restrictions on parking could soon be introduced in Rosslyn Crescent and Frognal Avenue depending on the outcome of a formal consultation.

The consultation is the second phase of a review of parking measures in the two roads, which started in November when residents were asked for their views on plans including a 24-hour CPZ.

Following the first consultation plans for the 24-hour CPZ were dropped as only 24 per cent of those surveyed were in favour.

However, all of the other proposals which include more double yellow lines, “no loading at any time” restrictions outside Harrow Mosque and a new loading space outside CostCutter, have gone through to the “statutory consultation” stage.

Residents have until May 8 to put forward any objections to the plans. Results of the consultation will be reported to the Traffic and Road Safety Advisory Panel in June.

All householders in Rosslyn and Frognal should have received consultation documents through their doors. For more information, or to comment on the plans, email transportation@harrow.gov.uk

You can see a report on the first consultation here.

The giveaway will co-incide with national Compost Awareness Week from May 6 to 12.

Harrow residents can take their own bag and have it filled with compost at one of three local events.

Get your free compost on Thursday, May 9, between 9.30am and 11am at Kenton Recreation Ground (Carlton Avenue car park).

Or on Friday, May 10, between 9.30am and 11am at Roxeth Recreation Ground (Eastcote Road car park).