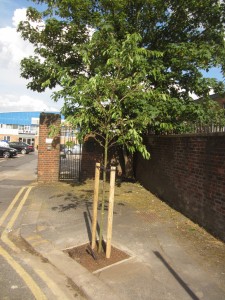 HCRA has succeeded in getting three new trees planted in Rosslyn Crescent thanks to support from Harrow Mosque and a local councillor.

One of the trees (pictured above), which was planted today, went in on the corner of the crescent nearest Lexus House. This tree was funded from Greenhill ward councillor Sue Anderson’s budget for community projects.

Meanwhile a pair of trees has been planted outside Harrow Mosque. One of these trees was funded by the mosque while the other was paid for by an individual who attends the mosque. 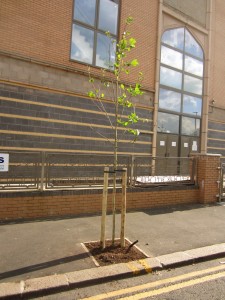 The trees flank the Rosslyn Crescent entrance to the building. 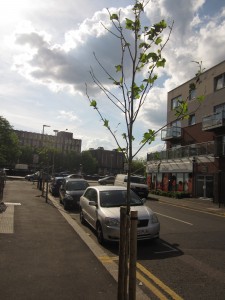 “We’re really grateful to Sue, the mosque and the individual donor who funded these three new trees as part of our ongoing tree-planting campaign,” she said.

“We feel trees make our streets much pleasanter places to live in, which is why getting new trees planted continues to be a priority for our residents’ association.”

So far HCRA has succeeded in getting nearly 40 new trees planted.

Cash raised via HCRA’s annual Dump Run event looks set to go towards at least one new tree and the association hopes to work with more local businesses and organisations interested in funding trees.

We are also looking to recruit a posse of “tree pit champions” who will help water the trees and look after the tree pits, including weeding and planting flowers.