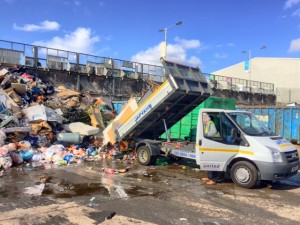 HCRA volunteers shifted vanloads of junk and cleared piles of fly-tipping as part of this year’s Dump Run event.

The event on Saturday 18 saw neighbours come out in force to pick up litter and ferry residents’ rubbish to the town dump.

The tipper truck went to the dump 10 times, disposing of 6,240kg of waste in total.

The team also weeded tree pits in Rosslyn Crescent, Frognal Avenue and Woodlands Road and cleared piles of rubbish, including mounds of garden waste dumped in the passage that runs between Rosslyn and Woodlands.

HCRA hired a chipper to deal with the piles of green waste.

“We were shocked at how much stuff had been dumped in the passage,” said HCRA deputy chair Jo Stephenson.

“Over the years residents have spent huge amounts of time and money trying to keep this space clear and tidy and it was very demoralising to see how much waste had built up in such a short time.

“However, we worked really hard and are really pleased we managed to get rid of almost all of it.”

The HCRA team worked virtually non-stop from 9am to 4pm.

For the third year running the association teamed up with the RSPCA to ensure good quality items went to charity and not landfill.

“There was a lot of rubbish to clear this year and we had to push to get everything done in time,” said Jo.

“We’d like to thank everyone who helped out including the guys at the dump, everyone who made donations towards the cost of the van and chipper, and those who provided much-needed refreshments.

“It was a great example of a community working together to make a difference.” 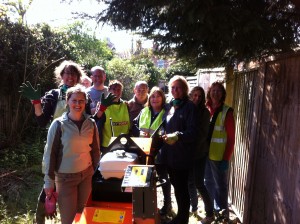 After the day’s exertions, volunteers celebrated with a Thai meal at a local restaurant. 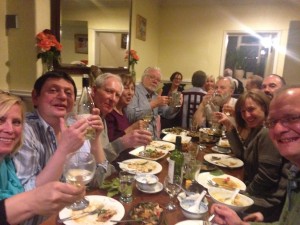 If you have any junk to get rid of then this is your chance. We hire a van and take it to the town dump for FREE!

All you have to do is leave it on the pavement – ideally before 9am. We start in Woodlands Road and make our way to Frognal Avenue and Rosslyn Crescent throughout the morning, finishing at around lunchtime.

Rubbish put out after this time won’t be collected!

Good quality items should be placed in the RSPCA charity bags we have delivered through your door. The RSPCA team will also take furniture in good condition.

Donations towards the hire of the van are always appreciated and we’ll also be going round collecting the annual £3-per-household subscription to HCRA.