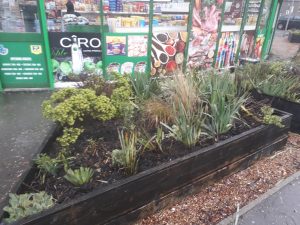 Harrow Central Mosque has pledged £100 to help replant HCRA’s community garden after it was chopped to the ground.

The mosque is just one of many local organisations and individuals to express their support for the garden on the corner of Rosslyn Crescent and Station Road after it was vandalised again last week.

HCRA volunteers have attempted to replant and tidy what is left of the garden and are now seeking funding for new plants.

They estimate at least £600 worth of damage was caused when plants were hacked down and uprooted.

The committee that runs Harrow Central Mosque said it would give £100 to help restore the garden.

Representatives from Harrow Council have also said they may be able to help with some money from a budget set aside for community projects.

The garden is outside the Stop and Shop convenience store and HCRA has been working with the shop management on a replanting plan.

Shop managers have also promised to give some money towards new plants.

“We were devastated when we found out the garden had been destroyed again but are really encouraged by the support we have had from the local community,” said Jo Stephenson from HCRA’s gardening group.

“We’re delighted that the mosque has pledged £100, which is really kind and generous and we’re hopeful that the council and others will get behind our efforts to restore the garden to its former glory.”

If you can help with a donation towards new plants then please email chair@hcra.org.uk