HRCA volunteers say they are “delighted” after securing a £600 grant from Harrow Council to restore a community garden that had been vandalised.

Members of the association’s gardening group applied for funding from the Harrow Council Community Fund after the garden outside the Stop and Shop store was chopped to the ground.

They learned this week their application had been successful with £600 given to HCRA to pay for new plants and other improvements.

The community garden on the corner of Station Road and Rosslyn Crescent was created by HCRA volunteers in 2015, transforming a derelict patch of wasteland.

However, the much-loved feature has been vandalised twice in the past two years, most recently in December 2019 when many plants were uprooted or cut down.

Those who look after the garden estimate it will cost £1,000 in total to restore it to its former glory, including repainting the wooden beds and installing new signage.

Harrow Central Mosque has already given HCRA £100 towards repairing the garden and HCRA will be launching a fundraising campaign to raise the rest of the money needed.

Gardening group co-ordinator Jo Stephenson said the council grant was a huge boost for everyone who has worked so hard on the garden over the years.

“We were devastated when the garden was vandalised so this is a massive morale boost for the volunteers who regularly come out in rain and shine to care for the garden,” she said.

“We are absolutely delighted and incredibly grateful to get this grant from the council, which will mean we can bring the garden back to life.”

The gardening group will now set about putting its replanting plan into action with work on the garden due to start in coming weeks. 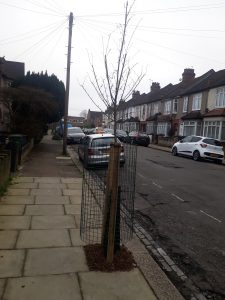 Three new trees have been planted in Rosslyn Crescent and Frognal Avenue thanks to HCRA’s ongoing tree campaign.

Over the past decade or so HCRA volunteers have lobbied and fundraised to get more trees planted in our three roads.

Overall more than 40 new trees have been planted – many paid for by the association, individual residents and from community funding made available to local councillors.

The latest trees – two in Rosslyn and one in Frognal – were installed by Harrow Council following ongoing discussion with HCRA.

“We think trees really make a difference to the look and feel of our streets,” she said.

“Residents can help look after our new trees by taking care when parking near them, reporting damage or broken branches to HCRA and by watering trees in hot weather.”