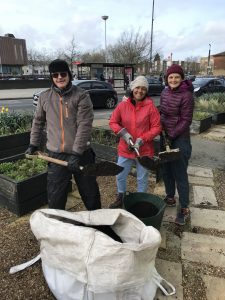 A team of volunteers from HCRA and Harrow Central Mosque have started work to repair the much-loved community garden after it was vandalised last year.

Scores of helpers including many members of the mosque’s youth group turned out to help with weeding, watering and spreading tons of compost and mulch. 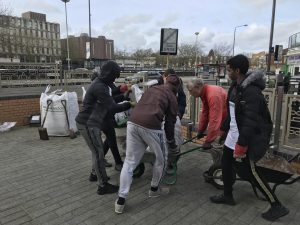 The garden at the corner of Rosslyn Crescent and Station Road was vandalised in December last year.

Since then HCRA has successfully applied for a £600 grant for Harrow to help pay for new plants and other improvements.

However, at least £500 is still needed to help restore the garden to its former glory and HCRA members are currently seeking funding.

The event on Saturday, February 22, was the first phase of a major project to bring the garden back to life.

Volunteers also helped weed and plant up the flowerbed at the mosque at the same time. 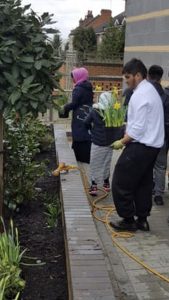 HCRA’s gardening group will be organising similar events in the near future to repaint the garden beds, plant bulbs and new plants and install new signage.

HCRA is seeking volunteers to help shift tons of compost as part of efforts to rejuvenate its much-loved community garden.

The association’s gardening group organising a working party to help shift soil this Saturday – Saturday February 22 – from 10am to 3pm.

The association is joining forces with Harrow Central Mosque’s youth group who will be helping out on the day.

But more people are needed to shift several tons of compost and mulch to the raised garden beds and mosque flowerbed.

Everyone is welcome to take part. Volunteers can help by bringing their own spade or shovels and wheelbarrows.

If you are interested in helping out then you can just turn up on the day or you can email jo@jostephenson.com for more information.

The work is part of wider efforts to restore the garden after it was brutally vandalised in December last year.